The future looks good for new farmers in RI 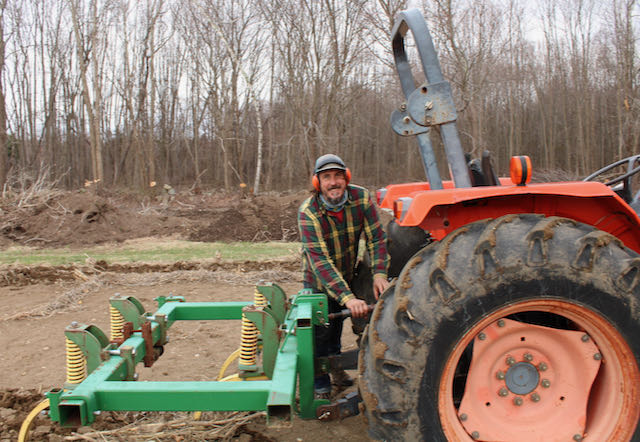 In 2021, SCLT will be offering increasing support for local farmers, expanding access to farmland and improving our ability to distribute healthy food, particularly in local Black and Brown communities. To be help us do this, over the winter SCLT hired three experienced farmers who will connect more growers with arable land, explore the viability of new crops and enable people to grow and market more, healthy (chemical-free) food for Rhode Islanders than ever before.

One of the new hires is Matt Tracy, who has been a local organic farmer for the past two decades. Matt co-founded Red Planet Farm in 2004, growing on a patchwork of urban and peri-urban plots before small-scale urban market farming became a widely accepted practice.

“We grew food on whatever land we could find, from hay fields to vacant lots to friends’ backyards,” he recalled. “It was a constant battle to compete for land with real estate developers.” 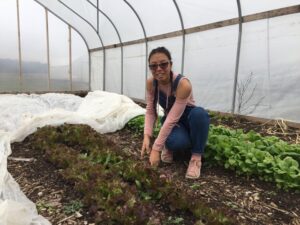 Top: Matt clearing a new field at the Good Earth Farm in Cranston. Above: Yuvi Cambero, a student in URI’s Sustainable Agriculture and Food Systems program, working in an urban-adapted high tunnel developed in partnership with SCLT.

To farm in this way meant finding allies, following local politics and learning the finer points of real estate negotiation. Eventually, Red Planet Farm coalesced on one location in Johnston. It stayed connected to the Providence community through a CSA and through Little City Growers Cooperative, which continues to sell fresh produce to many of the best-known farm-to-table restaurants in the area.

Matt also serves on the board of the Northern RI Conservation District, which works with farmers, landowners, municipalities and agencies to help people become better stewards of the state’s land and water resources. His work focuses on developing long-term leases for farmers on publicly owned land, including Snake Den Farm in Johnston.

“Turning a piece of land into a farm in the modern context is a weird skill set,” Matt said, but one that suits him fine as SCLT’s new land access manager. His first project at SCLT is to guide the farm succession process for the Good Earth Organic Farm & Garden Center in Cranston. SCLT is buying this 20-acre property from owners John and Joyce Holscher, who are retiring after two decades in the business. He will develop a five-year plan to maintain and build on the Good Earth’s legacy in the organic growing community.

Matt is also advising the farm’s newest leaseholders on the land, a mix of growers from Urban Edge Farm and urban farmers. He thinks the Good Earth can ultimately host 6-8 farmers, with potential opportunities for greenhouse growers, compost production and permaculture.

Matt will also resume quarterly meetings of the statewide Land Access Working Group, which shares information with farmers about USDA financing programs, innovative land transfer strategies, financial and risk management and farm succession opportunities. You could say Matt will have his ear to the ground on land access matters around the state.

Dave Kuma, who ran Moor Food Farm for the past two seasons, is working closely with John Taylor, Assistant Professor of Agroecology at URI, to conduct research on high-value rhizomatic crops, such as hops, ginger and turmeric, to determine optimal varieties and growing methods so they can be cultivated successfully in Rhode Island. Ginger and turmeric are used by many in SCLT’s network, so there’s already a market for them as well as for locally grown, organic hops, which craft brewers are eager to buy.

The NRCS Conservation Innovation Grant involves researching crops over a two-year period on land at both URI and at UEF. According to John, they will “develop ideas collaboratively to address the needs of urban growers, and then evaluate those ideas both under controlled experimental conditions at URI and under real-world conditions at SCLT sites.” They will share their findings with up to 50 other farmers in a series of workshops and demonstrations by the end of the grant period.

Ben Torpey, manager of Scratch Farm in Cranston, now serves as SCLT’s manager of Urban Edge Farm. Ben has been involved with growing food and running CSAs since 2003, both in the Hudson Valley and, since 2012, at Scratch Farm, where he will continue to raise crops this year for area restaurants (but not for the CSA).

Ben’s background, which includes working with refugee farmers in Providence, will serve him well in this role. He will provide fiscal oversight of UEF, create mentoring relationships and foster new business partnerships among farmers. Many UEF farmers immigrated to the US from countries such as Cambodia, the Dominican Republic and Liberia. Most began on urban farms, selling to members of their communities at farmers markets in and around Providence. Most still do and sell directly to restaurants and through SCLT.

Of UEF’s 50 acres, 22 are now in production by 18 farmers. SCLT has been steadily improving the infrastructure at UEF so farmers can grow, harvest and store more food until it is sold to consumers. Last fall, Ben set up a depot at UEF that provides farming supplies at or below cost, including landscape fabric, tomato stakes and twine and organically approved pesticides. The depot was started with seed money from a COVID-relief grant from the RI Foundation.

“In small-scale vegetable farming, timing is critical and having the necessary materials on hand without having to pay for or wait for shipping, especially with COVID-related backlogs, has been valuable this spring,” says Ben.

Ben is pleased by the mix of new growers at UEF and “more established farmers who are serving as mentors and advisors, while also running their own businesses. The mixed levels of experience, as well as areas of expertise, among farmers at UEF are turning out to add a richness and stability to the farming community as different growers bring different strengths to contribute to the group.”

Meanwhile, SCLT is supporting local farmers and increasing food access in the state through its VeggieRx program. Last year, we partnered with Integra Care Network to source produce from 14 farmers in our network for 40 families in East Providence. In 2021, we will expand VeggieRx to Providence, serving a total of 80 households.

Farmers who sold their harvests through our Produce Aggregation Program saw their revenues for 2020 increase by 37% over 2019. With the completion of our new headquarters later this year, including a much-needed Farm-to-Market Center, we will have much more capacity to aggregate and distribute fresh produce to communities where it is needed most.

Who could’ve predicted that his simple goal, envisioned by SCLT’s founders, would require such complicated programs 40 years later? Thanks to another silver lining of the pandemic, after the past year more people understand the need for a secure, resilient and just local food supply.

If you’d like to help SCLT to achieve this, please go to our website’s GROW! Capital Campaign page.

Your ticket for the: The future looks good for new farmers in RI

The future looks good for new farmers in RI