Our mission is to provide access to land, education and other resources so people in Rhode Island can grow food in environmentally sustainable ways and create community food systems where locally produced, affordable and healthy food is available to all.

SCLT programs, community gardens and farms serve people in urban neighborhoods where fresh produce is nearly impossible to find – especially in quantities and at prices that support residents’ health. 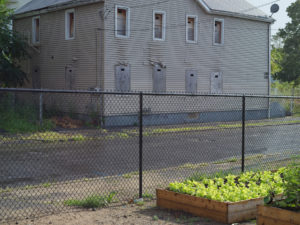 While our programs, reach and operations have grown over the past four decades, food insecurity – inconsistent access to adequate nutritional foods – continues to affect large segments of the population.

This is partly because of the disappearance of grocery stores selling fresh produce in economically challenged neighborhoods, leaving food deserts in their wake. Many people depend on processed foods (made with subsidized crops like sugar, wheat, corn), which are easier to afford than fresh fruits and vegetables.

To bring healthy food to people with the least access to it, SCLT trains gardeners and farmers to grow food for their families and neighbors and provides inexpensive land and agricultural resources to help them to do it. (Our garden network alone produces food for roughly 1,200 people and their families every year!)

SCLT staff have actively promoted programs and policies to build a more just and sustainable food system. We advocated for a Comprehensive Plan that included aggressive goals for community gardens and urban farms in Providence. We helped pass a Providence city ordinance allowing backyard chickens. We have advocated for increased investment by the State of Rhode Island in farmland access programs. SCLT was also a founding member of the RI Food Policy Council, which creates partnerships, develops policies and advocates for improvements to the local food system to increase and expand its capacity, viability and sustainability.

The farmers we support with low-cost leases and agricultural resources are improving our local food system (and Rhode Islanders’ health) by increasing the supply of locally grown, organic produce. Please support our efforts.

Hear from community members about our programs and impact this video made for our annual Harvesting Hope fundraiser.

Your ticket for the: Mission & Impact