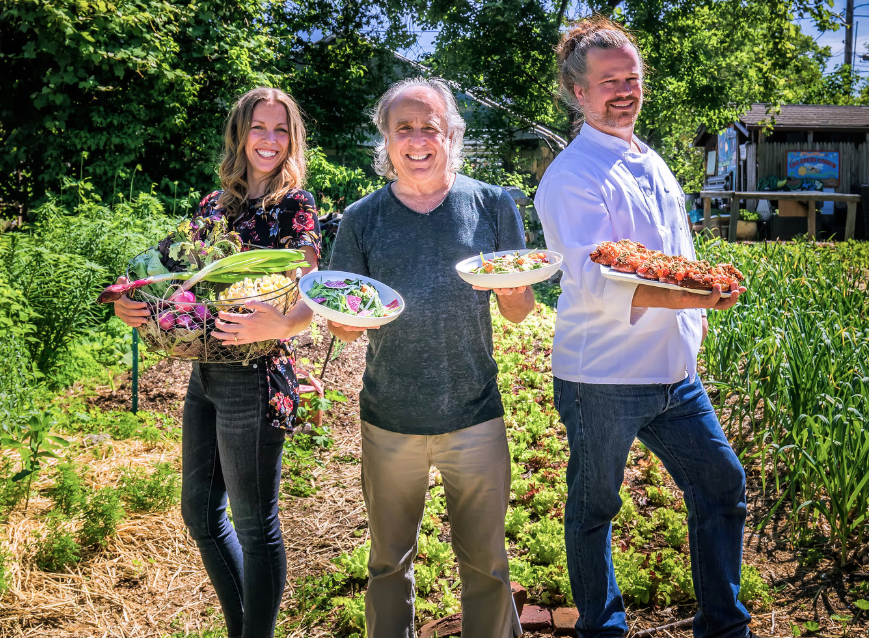 The capitol is flourishing – with urban gardens, farmers markets, and locally sourced menus

Imagine a green future. Gardens on every city corner! Bright markets packed with local produce! State-of-the-art greenhouses for year-round cultivation! Restaurants that not only serve earth-friendly food, but transform seasonal ingredients into works of art!

It sounds like a pipe dream, yet that future isn’t distant. It’s not even theoretical. Many of these things are already here. Blueprints have been drawn. Ground has been broken.Visionary new venues are about to spring open. Indeed, Providence is greener than most people realize; it’s teeming with growers and grocers, rural farmers and urban cultivators, organizers, laborers, delivery drivers, cashiers, and chefs. Our neighborhoods are robust with community gardens and farmers markets. Until now, passersby might not have noticed that other, verdant world. But our collective awareness is changing, fast.“So much of culture revolves around food,” said Mayor Jorge Elorza, during a speech at the Edible Providence event in May. “Providence has been out in the forefront of integrating urban agriculture [with] thoughtful city planning… to combat diet-related chronic disease, reduce the amount of vacant or under-utilized land around the city, cut down on wasted food, and also strengthen local soils through composting – and catalyzing, of course, economic development at the citywide and neighborhood level.”

This is not just a trendy pastime. There is a nutrient-rich paradigm shift in our city. Here are some of the trailblazers of this tasty new movement, and the many ways they are transforming our health, economy, and urban landscape.

Farm Fresh Rhode Island started with an apple. Or, rather, not an apple.

In the early 2000s, Louella Hill and Noah Fulmer were students at Brown University, and they wanted to find an apple that was grown in the state. Considering how many local orchards there are, the task proved surprisingly difficult.

“They were dismayed that they couldn’t find a Rhode Island-grown apple,” says Lucie Searle, a project manager at Farm Fresh RI. “This was the impetus. Our organization is all about connecting people who live and work here with the farms in the area.”

That seed germinated fast. In only 15 years, Farm Fresh has grown from an offbeat idea into a household name. The Pawtucket-based nonprofit oversees 10 different farmers markets, many of them in low-income neighborhoods. They send nutrition educators to schools and community centers. They developed “Fresh Bucks,” a special coin system that helps farmers sell products without credit card machines; thanks to grants, the exchange rate is doubled for food stamps, encouraging low-income families to buy local. They created Market Mobile, an “aggregation network” that connects over 100 regional farmers to more than 300 wholesale customers across New England; clients can order fresh produce directly from farmers, and Farm Fresh will use up to six trucks to deliver these items the very next day. Deliveries take place from Boston to Narragansett, and clients include everything from restaurants to college campuses.

Farm Fresh RI is currently headquartered in Hope Artiste Village, the mixed-use industrial building on the edge of Pawtucket. Farm Fresh’s popular Winter Market also takes place here during the colder months. But even this massive structure, with its voluminous corridors and two loading docks, isn’t enough to support the 70 to 80 farmers who display each winter week.

“We have been very happy at Hope Artiste Village,” says Lucie. “But nothing in this facility was purpose-built. Nothing is in the right place. When people come to visit us, they usually get lost. So we asked ourselves: ‘Where do we want to be 10 years from now?’ We have to have a facility that matches what we’re doing.”

Enter the Food Hub, a sprawling, year-round farmer’s market that will break ground this summer. With a construction budget of $15.5 million, the Food Hub will provide new office and commercial space – but more importantly, it’s the culmination of everything Farm Fresh RI has been trying to accomplish, from empowering small farms to revitalizing urban Providence.

On every level, the Hub seems to mend an existing problem: The new building will stand on 3.2 acres of “brown fields,” which have stood vacant for years. Its location is the Valley neighborhood, an industrial corridor along the Woonasquatucket River, which is already home to the WaterFire Arts Center and the expanded Steel Yard. A new pedestrian bridge will span the river, encouraging visitors to park, walk, shop, and experience this burgeoning arts district. When the facility opens in 2021, its 60,000 square feet will be dedicated to markets, production rooms, offices, and classrooms. Local food businesses will be able to rent space – the perfect spot for prep-shops and catering companies.

The result isn’t just a healthier local economy, but better consumer awareness. “If you were to go to Chez Pascal tonight,” says Lucie, referring to the acclaimed French eatery on Hope Street, “Kristin and Matt [Genuso] could tell you what farm the carrots came from. They could tell you what port the fishing boats are based in, the captains of the boat, and when the fish was caught. In the industry, that’s called traceability.”

“We didn’t make a garden,” says Margaret DeVos, executive director of the Southside Community Land Trust. “The garden made this.”

If you’re not looking for the Land Trust, it’s easy to miss. The organization is based in a former Victorian house on Somerset Street. On warm days, the cramped kitchen opens onto a deck, which opens onto gardens. The conference room is barely big enough to seat all the Trust’s board members. Yet from these humble lodgings, the Trust manages 53 sites – community gardens and production farms – across the city.

The Land Trust is surprisingly mature, dating back to 1981. At the time, suburban flight had leached the Southside of its middle-class population, and scores of residences were abandoned or torn down. The neighborhood also flooded with refugees, many of them Hmong families from Southeast Asia, who were eager for soil to sow. Again, several Brown students became involved, as well as community leaders. Together, they converted an abandoned lot into the Somerset Garden. Thirty-eight years later, that garden is still thriving.

Cultivators of all skill levels can plant seeds, grow crops, and walk away with bushels of fresh produce, to use however they wish. The majority of growers are still immigrants, and SCLT claims that 25 languages are spoken regularly among the beds. Each garden is a mishmash of tarps, furrows, tomato cages, and steaming mounds of compost. On a sunny summer day, these gated rectangles are so lush and aromatic that it’s easy to forget they were once trash-strewn lots – dead spaces that demolished buildings left behind. Most of these gardens and farms aren’t very large; the 53 sites cover only 32 acres in total. But the social effects are profound.

SCLT is finalizing its own new facility – 404 Broad Street, a renovated structure that stands a few blocks from the Trust’s current offices. The crumbling old building has a storied past, first as a livery, later as a row of small shops. By the spring of 2021, however, the address should buzzing with activity.

The project is part of SCLT’s “Grow!” campaign, the $2.2 million project will provide 12,000 square feet for offices, stores, classrooms, and USDA-approved production facilities. The block itself is adjacent to Trinity Square, and it’s familiar territory; just outside, SCLT has managed the Youth Enterprise Farm for years. On that parcel, fledgling farmers have been learning the art and business of modern tillage, promising a fresh new generation.

“This isn’t just about food, or plants,” says Margaret. “It’s about people and communities. When people have access to land and other assets of the food system, people can figure out how to feed their communities. It’s when they don’t have control over it that we don’t access the fresh foods that are going to keep us healthy.”

“We’re reaching a whole different phase of integration into the American diet,” says Robert Yaffe, owner of Wildflour Bakery, The Garden Grille, and The Grange– all popular plant-based eateries. “We’re in the middle of a major shift. It’s not just what you eat, but where are you getting it from?”

Robert has been promoting nutrition and plant-based victuals for decades. Long before seitan barbecues and farm-to-table bistros, the Yaffes were boldly extolling the virtues of smart, responsible sustenance. Robert, that legacy began with his grandmother, Reggie Jaffe, who converted to a raw-food diet in 1941. She was a woman far ahead of her time: Reggie experimented with different foods, avoided all pharmaceuticals, and practiced yoga.

In 1971, Reggie’s daughter Erna established a health food store, The Golden Sheaf, with her husband Bert Yaffe. “When we opened,” recalls Robert, “it was considered alternative. What we’ve always done, since the beginning, is try to appeal to the broadest possible market, to make it accessible. We created a place for community.”

Robert is no longer an outlier – to put it mildly. Just as countless commercial kitchens are absorbing local and organic ingredients, celebrity chef Matthew Kenney has just opened the Plant City, a two-story “vegan food hall,” on Water Street. Customers can pick from several restaurants, shop at a plant-based grocery, order a cocktail at the bar, or sit at any of 225 seats.

Seeing an explosion local demand, New York-based Gotham Greens is also constructing a colossal new greenhouse on Harris Avenue; the new facility will incorporate 110,000 square feet, and the company plans to grow 10 million heads of organic lettuce and leafy vegetables each year. The structure will rise around the corner from the Food Hub, also a stone’s throw from the Woonasquatucket River.

Meanwhile, the Urban Greens Co-Op Market just opened at the end of June, introducing customer-owned groceries to the West End.

“We’re really at this quantum leap point in our culture, regarding plant-based,” says Robert. “It’s going into hyper-drive. Right now, our focus is to make better what we are already doing.”

Now, just watch it all grow.

This article appeared in the July issue of Providence Monthly. Photo of Deanna Lockard, Rob Yaffe, and Jon Dille of The Grange taken at Somerset Community Garden by Wolf Matthewson.

Your ticket for the: The Plant-based City