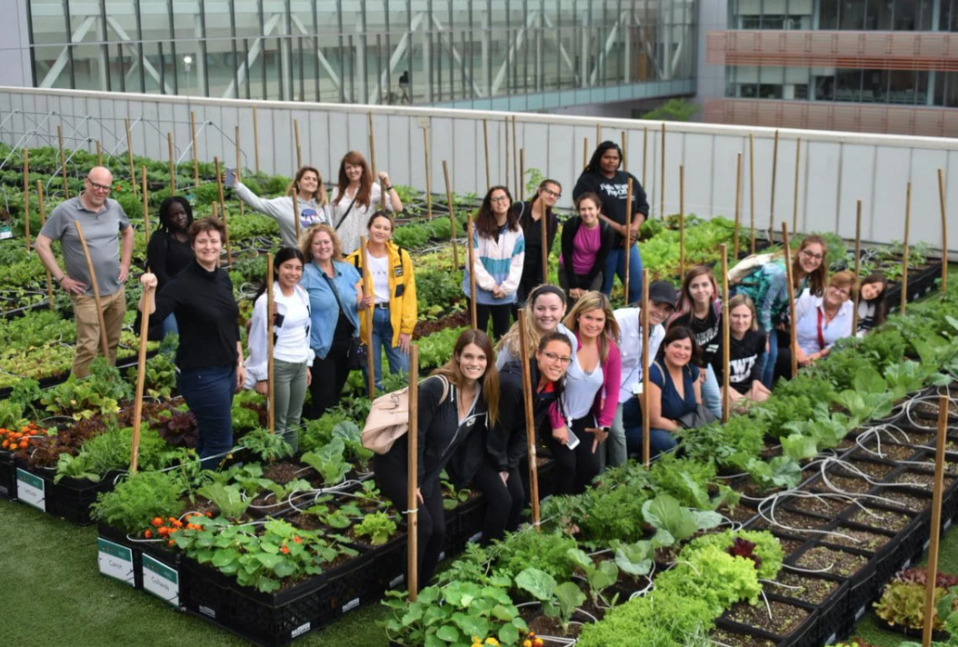 Thanks to a grant from the 100,000 Strong in the Americas Innovation Fund, the students were at the midpoint of a 3-week collaborative study abroad program to explore issues of sustainable community wellness and nutrition in the Americas.

The first week was spent in Argentina, working with nonprofits like CONIN, a community center and clinic that works with area families — mainly mothers and children — affected by reduced resources, malnourishment and food scarcity. The second week took place in Providence (and included the City Farm tour), with the final week held in and around Regis College, including greater Boston.

“It was about giving people food autonomy, as well as a connection to the earth.”

As part of the City Farm tour, farm steward Rich Pederson shared a brief history of the SCLT, which was founded in 1981 when a group of South Providence neighbors and newly-arrived Hmong refugees joined forces with 3 Brown University students to transform an abandoned lot into the neighborhood’s first community garden. “It was about giving people food autonomy, as well as a connection to the earth,” he noted. The garden also helped stabilize and revitalize a formerly blighted area that lacked access to fresh food. 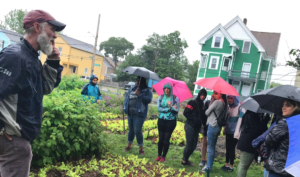 City Farm Steward Rich Pederson describing the work that goes on at the farm and its role in the local food ecosystem.

Since then, the Land Trust has continued to expand. In 1986, with the community garden firmly established, the SCLT purchased City Farm as a way to demonstrate sustainable and bio-intensive (organic, high-yield and soil-enriching) farming methods. Today, the SCLT encompasses 21 directly managed community gardens, 3 production farms and 3 growers’ collaboratives. Through partnerships with schools and community organizations, they indirectly manage another 37 community gardens throughout the greater Providence area. The Trust recently purchased a 12,000-square-foot building at 404 Broad Street that will be developed into a mixed-use facility combining food-focused retail, USDA-compliant food processing, and administrative/educational space.

For the students, the farm tour was an eye-opening look at how a small group of committed activists can, slowly but surely, effect change. The SCLT might have started with hyper-local ambitions, but it has evolved into an organization with the clout and vision to advocate for integrated municipal policies that support agriculture, food production and greater community access.

After their City Farm visit, the 100,000 Strong group toured markets in Providence and Boston. To understand a different side of community-based action, they also visited Rosie’s Place, a Boston women’s shelter that offers food, shelter, and educational programming.

Ultimately, these students will develop final projects that tie in to their community research and align with their respective areas of study:

The $25,000 grant for the Sustainable Wellness and Nutrition in the Americas program is through the 100,000 Strong in the Americas Innovation Fund and its partner, the MetLife Foundation, as part of the public-private sector partnership between the U.S. Department of State, Partners of the Americas, NAFSA: Association of International Educators and other organizations working together to stimulate new higher education partnerships between the United States and the rest of the Western Hemisphere.

Your ticket for the: Lessons in urban agriculture at City Farm