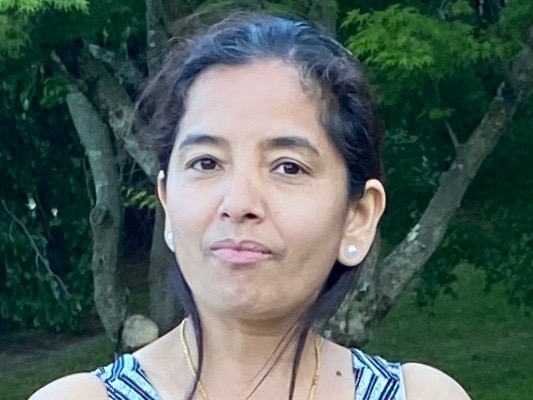 Like many refugees who arrive in Providence, Bishnu Poudel was eager to obtain a plot in one of SCLT’s community gardens. Soon, she began growing the vegetables she and her family were used to eating in Nepal, and before that, Bhutan, as well as socializing and networking with refugees from three continents. Within a few years, she became the garden leader at the Greenwich Community Garden in the city’s South Side, helping to maintain the common areas, distributing resources, answering questions and collecting plot fees.

“If you don’t have a garden, you stay home,” Bishnu said of her options upon arriving in the U.S. She also wanted to guarantee a supply of fresh produce throughout the season to feed her family.

Bishnu joined SCLT’s staff early last summer as a community garden associate. But, she and her husband Tek were already familiar faces around the office, especially to Andrew Cook, the community garden coordinator.

He had hired both over the years to translate for other Nepali gardeners during SCLT workshops and meetings. Bishnu is also the mother of Nirajan, who has worked on the City Farm crew and the youth staff over the past few years. 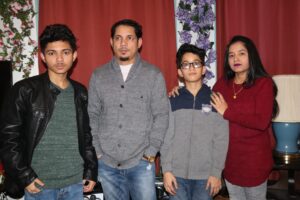 “Bishnu has helped us maintain and clear a lot of new land and unused plots, which makes it way easier to hand them over to new gardeners,” said Andrew. “Her work has meant that a lot of maintenance issues get resolved much faster than normal. And she’s been able to help with keeping in contact with gardeners, Nepalis and others.”

Bishnu’s family fled Bhutan in 1991 when she was 11, and lived in a tightly packed refugee camp in Nepal until 2013. By then, 110,000 Bhutanese had taken refuge in seven camps in the southeastern Jhapa region of the country. Bishnu recalled that the Nepali government didn’t do much to help refugees with schooling or skills training, and prevented them from working and taking jobs away from Nepalis.

She credits two relief agencies, the UNHCR and CARITAS, with providing crucial support to prepare refugees for life after the camps. She learned about nutrition and assisted healthcare workers within her camp. She also grew vegetables to supplement her family’s weekly ration of rice, lentils, oil, sugar and salt.

In Bhutan, Bishnu had lived on her grandfather’s 20-acre farm, along with her grandmother, two aunts, four uncles and their children. They grew rice, corn, millet, wheat and vegetables. Their lives were peaceful, but tensions had been rising between the Bhutanese and the growing population of ethnic Nepali who had lived in Bhutan, but not assimilated, over many decades.

One day government soldiers came to confiscate the farm. Her grandfather refused and the soldiers left. Fearing they’d be back, he spent that night hiding in the jungle before fleeing to the Indian border. The next night all 23 family members took what they could carry on their backs and set out on foot to join him. Bishnu clearly remembers the exhausting journey, made worse by heavy rain and wind.

Once in India, her family met up with her grandfather and holed up in a house for three weeks, paying the owner to keep them safe. After this, they travelled by bus to Nepal and eventually resettled in one of the camps set up for Bhutanese refugees. Bishnu’s grandfather lived only another six months after their arrival.

While her family hoped to stay together when they could finally leave Nepal for a third country, some ended up emigrating to Australia. She and her mother, one sister and brother resettled in Rhode Island, along with Tek, Nirajan and a younger son, Nishant. In their new lives in Providence, they continue to observe Bhutanese holidays and traditions as much as possible.

For Bishnu, that includes making curries for her family every day, with food from her garden.

Your ticket for the: Growing food helps SCLT’s new garden associate hold onto her roots