Local artist combines stories and recipes in Things We Share 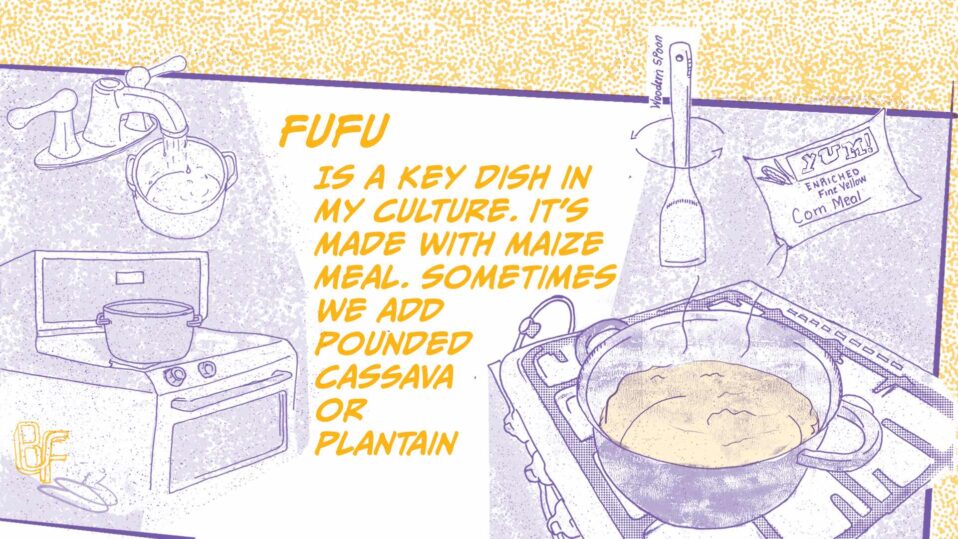 Jazzmen Lee-Johnson had been interested in food growing, food as self-care and cooking long before she created the graphic novel cookbook, Things We Share.

But the idea began to take shape after working with food insecure youth and refugee communities in Providence, which gave the project a purpose: to address food access and to celebrate cultural traditions around food and medicine.

During the summer of 2019, while serving as an artist mentor with high school students, she realized that many were receiving the majority of their meals at school. She wondered where they got them during the summer. Around this same time, she became the RI Department of Health’s inaugural artist-in-residence. She worked with Michelle Wilson at the Office of Minority Health and Refugee Health Promotion to address the top needs of Providence’s refugee community. Again and again, themes of food access, culture shock upon immigrating to Rhode Island, and food as medicine rose to the surface.

At this point she thought, this is it, it’s time to bring this project to life! 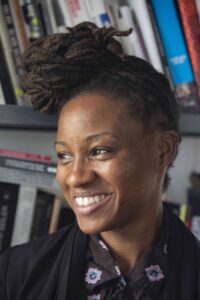 The cookbook grew out of Jazzmen’s interest in food and  her experiences with Providence youth and refugees.

Things We Share uses art to raise awareness of health disparities, and combines practical information, cultural and personal history to celebrate resilience and community health. It was made possible with support from Rhode Island’s Department of Health, the State Council on the Arts, the Arts and Health Network, ArtPlace, SCLT and Binch Press. Although it was just completed at the end of the summer, the cookbook already received national attention when it was included in an Oct. 7 Washington Post article about getting kids interested in cooking.

Creating the cookbook “was a labor of love,” said Jazzmen. Last winter, at a refugee support meeting at Dorcas International Institute, she connected with SCLT’s Andrew Cook and Isabelle Izobankiza. They immediately supported the project, and brought on other SCLT staff, including Raffini, Rich Pederson, Jazandra Barros, and Alejandra Mayorga.

Raffini and Andrew helped connect Jazzmen with SCLT community growers and others who represented a variety of experiences, cultures, and stories. Jazzmen and Raffini conducted the interviews, collecting not only recipes, but glimpses into people’s histories and what is important to them. Community members, from age 19 to the mid-60s, were interviewed, including Providence natives Raffini and Jazandra.

Local artists Bonnet Fahari and Alejandra worked with Jazzmen to create the beautiful illustrations, which give life to the pages. SCLT provided stipends to interviewees and illustrators, recognizing that the work of maintaining food ways and producing healthy food is often un- or under-compensated.

The cookbook includes meat-based recipes and vegan recipes. Some stories are humorous or inspiring, while others are about scarcity. Raffini and Jazzmen were struck by gardener and social worker Isabel Kayembe’s memories of having only a few ingredients to cook with during her time at a refugee camp in Namibia. For 17 years, she made the same meal, every day.

While each story is different, many are connected. This is what inspired the title. Raffini was particularly excited when she learned of the connection between jollof rice, which has many iterations in different parts of West Africa, and jagacida (jag), a Cape Verdean rice and bean dish.

“I feel we are lost nomads,” she said. “When I learn something about my ancestors it’s very exciting. Very exciting to know we are connected through food.”

Things We Share is unique, colorful, and sentimental. When you look through it you can feel the passion, the care, and the artistry pouring out of its 40 pages.

Jazzmen says, “I feel like it’s a really good template for sharing stories and recipes in years to come.” She hopes new editions will have more interviews with community elders. She would also like collaborators to spend time cooking and gardening together, which they were unable to do this year due to COVID-19.

So far, the Department of Health has printed 200 copies of Things We Share, but more may be printed soon. You can download a pdf here.

Illustration above by Bonnet Fahari and Jazzmen, from Bonnet’s story about making his native dish, Congolese fufu.

Your ticket for the: Local artist combines stories and recipes in Things We Share

Local artist combines stories and recipes in Things We Share