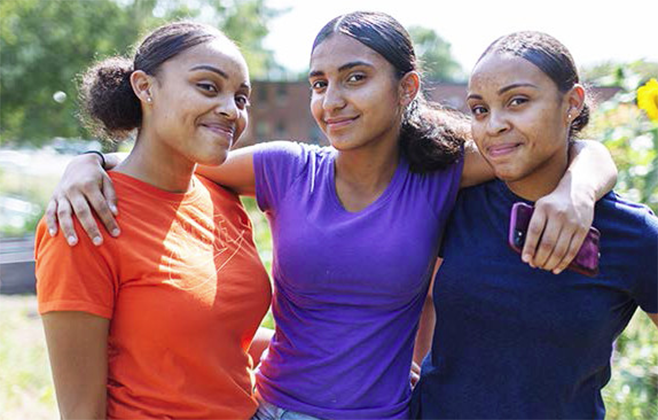 PAWTUCKET – Talk about a truly “good news” story. To celebrate its report to the community and to highlight the successes of the past year, the Pawtucket/Central Falls Health Equity Zone held a farm to table dinner at the Hope Artiste Village on Sept. 26.

The dinner was prepared by cooks at Harvest Kitchen, featuring local produce grown in part by the Southside Community Land Trust, which had helped to construct 76 community garden beds at Gallego Court in Pawtucket as part of the HEZ.

The gathering was hosted by LISC Rhode Island, the backbone agency that has helped to coordinate some 40 different community entities from the two cities in a collaborative effort to improve the health and well being of the community.

The creation of the Health Equity Zone, one of 10 in Rhode Island, was seeded by a grant in 2014 from the R.I. Department of Health with support from the Centers for Disease Control and Prevention.

The goal of the Pawtucket/Central Falls HEZ is to reduce health disparities for residents in these two communities, putting the emphasis on access to social and economic opportunities, the safety of neighborhoods and housing, the ability to access healthy food and equitable health care.

The work plan for the HEZ, created as part of a collaborative process, was presented to the community in 2016 in a presentation at Slater Mill. The celebration on Sept. 26 featured a number of success stories, as told by the participants, many of which were highlighted in the 2017 Report To The Community:

• Creation of walking paths in both Central Falls and Pawtucket

• Increased opportunities for jobs and income, initially pairing 20 students with 32 senior households to help with snow removal, then expanding the program to include as many as 50 senior households.

But a number of participants stole the show when it came to telling their stories:

• Blanche Carter, a Wilfred Manor resident, and Rogelio Martinez, a 9th grade student at St. Patrick’s Academy in Central Falls, who were paired together as part of the snow removal project.

• Mirna Rivera, a participant in the Diabetes Self-Management Education program, who had lost 40 pounds as a result of her participation. Her brief talk was given in Spanish, which was translated into English by her daughter. Her granddaughter then proudly posed for photographs with the page from the 2017 Report To The Community that featured her grandmother. Call it a family in action.

The really big news
The really big news of the evening was the announcement by LISC Rhode Island that it had closed on a $5 million investment to help fund the construction of the Neighborhood Health Station facility in Central Falls. The new facility, at the site of the former Notre Dame urgent care facility at 1000 Broad St., is scheduled to open in the fall of 2018. A groundbreaking ceremony was held a year ago featuring Central Falls native Viola Davis.

Photo Courtesy of LISC RI’S 2017 Report to the Community

This article originally appeared in ConvergenceRI

Your ticket for the: Pawtucket/Central Falls HEZ celebrates success