Supporting the farmers who feed us 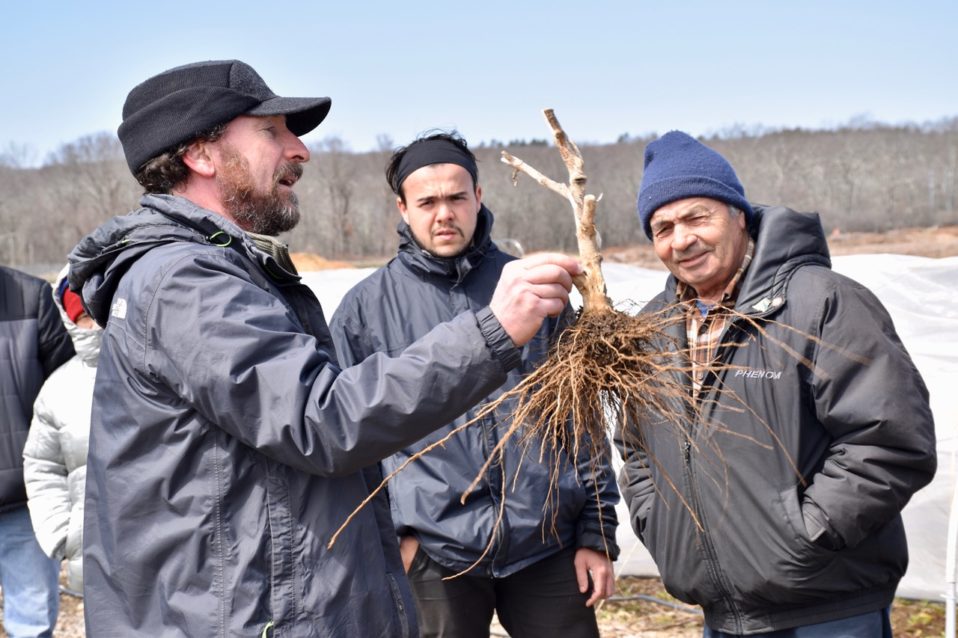 Two years ago, SCLT received one of the largest grants in its history: nearly $600,000 from the U.S. Department of Agriculture, National Institute for Food and Agriculture, to be spent over three years. The funds would provide training and other support for beginning farmers and help increase the acreage for food production in Rhode Island. SCLT would share funding with several local partners to achieve these objectives.

A lot has happened since then, and we thought it was a good time to share our progress in three of the grant’s major program areas.

To address the need for affordable farmland to grow food in our state, SCLT brought together partners from throughout the region to form Th e Land Access Working Group. The LAWG’s goal is to open up access to farmland by having personal conversations with landowners about how best to protect their interests and by developing web-based tools for facilitation, all while making farmland accessible and affordable for growing farm businesses. Toward this end, the group has been brokering deals, helping landowners write RFPs for use of their land, facilitating lease arrangements between farmers and landholders, and helping both farmers and landowners take advantage of local, state and federal programs that support agricultural projects going forward.

When Rich came to SCLT in 2001, there was a lot of work to do at the Farm and not enough help. At the same time, local students were interested in working hard in return for learning how to grow food. He recalls taking on students from PC, Brown, RISD, Wheaton, Johnson & Wales, CCRI, RIC, URI, Bryant and others over the years.

The PC internship is coordinated by Keith Morton, a professor in PC’s Public and Community Service Studies and American Studies departments, and former SCLT board member. The internship began as a semester-long program in 1995, but Rich and Keith convinced higher ups at PC that it should run the length of the growing season and include a full-time position during the summer. For the past five years the PC intern has become fully immersed in the Farm and gains a full understanding of urban agriculture from seed to harvest.

SCLT also has a long history of working with Brown University. Recently we reconnected with the Swearer Center, which has provided fellows to our staff in the past two years. Dawn King, a professor in Environmental Studies, has brought students to learn about and spend time at City Farm soon after coming to Brown six years ago. With expertise in local food policy and politics, she teaches a popular course, “Urban Agriculture: The Importance of Localized Food Systems,” which is categorized as an Engaged Scholarship course at Brown. The Program enables students in participating majors to integrate their academics with community engagement, designing their concentration curriculum around designated Engaged Scholarship courses and combining this coursework with outside practicum and capstone projects. Although the Program is still relatively new in its third year, King’s courses have been well ahead of the curve in terms of community engagement being incorporated into the curriculum.

“Environmental studies students in general tend to be a little more hands-on,” Dawn says. “They like to get their hands dirty and get off College Hill.” Having an engaged component allows them to get a practical education that includes learning about not only urban agriculture but also how to navigate a relationship with a community partner.

Many of Dawn’s students are inspired by their experiences and want to do more. “Ideally, students graduate and feel empowered to be part of that next community as well,” she says.

URI also has a symbiotic relationship with SCLT. John Taylor, a professor of Plant Sciences and Entomology, is currently conducting a longitudinal study about the impacts of developing a community garden on populations at Galego Community Farm in Pawtucket. He collaborates with faculty in URI’s College of Health Sciences to explore the garden’s effect on social networks as well as the dietary habits of both gardeners and neighboring residents.

LAWG partners include Young Farmer Network, The Nature Conservancy of RI, RI Department of Environmental Management, RI Land Trust Council, Northern RI Conservation District and Land for Good. Sebastian Interlandi, SCLT’s new Director of Farmland Access and Education, says that “the LAWG is the only group in the state that brings members of governments, private land trusts and other nonprofits and agriculturally minded groups together on a regular basis to work on the problem of lack of access to affordable farmland in our state.”

Since 2017, the LAWG has matched four small-scale growers with farmland in Rhode Island. It is currently working with landholders for additional properties, and members anticipate opening up at least 30 acres of land to other beginning farmers over the next few growing seasons.

Due to the Beginning Farmer grant, SCLT staff have been able to significantly increase the number of workshops we offer, and to connect more growers with resources and people who can help them expand their farm businesses. Last year we provided 17 beginning farmer workshops attended by 119 growers; this year we plan to offer at least 18. 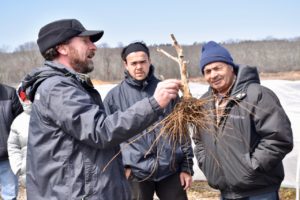 One of the partners co-leading these workshops is the University of Rhode Island’s Cooperative Extension program. Extension agent Andy Radin, and his colleague, Heather Faubert, have been able to introduce methods and agricultural tools to help urban farmers increase their productivity, and to share ways to prolong the growing season, manage pests and decrease their water use. They’ve also offered farmers free resources including low tunnels and drip tape.

“We’re used to working with people who grow on thousands of square feet of cropland,” said Andy, compared to urban farmers growing on small parcels. The partnership with SCLT “gives us the opportunity to work personally with growers in the city and gain an appreciation for what they’re doing and how they’re doing it.”

Many SCLT workshop participants are from Africa, Asia and Central America and are growing different crops from what Andy and Heather are used to. “People are growing sub-tropical and tropical plants, which makes us rethink horticultural methods that can enhance productivity,” he said.

Another farmer training partner is the Northeast Organic Farming Association. Jan Martin, NOFA’s board president, said: “Our workshops are taught by experienced livestock farmers and our partnership with SCLT helps us reach a more racially and financially diverse group of farmers.” SCLT helped sponsor NOFA’s last two winter conferences and is funding workshops focusing on livestock farming during the summer.

On-farm apprenticeships are an experiential opportunity to learn directly from farmers through an entire growing season. Most beginning farmers say they are, by far, the best way to learn how to farm.

SCLT has hired apprentices at City Farm for several years, and many have gone on to start their own successful farms. But few other farms in the state have the means to pay for comprehensive on-the-job training. The Beginning Farmer Grant has given SCLT three years of funds for three additional farms to hire apprentices. Sidewalk Ends, Foggy Notion and Pat’s Pastured Farm all took on apprentices the past two seasons and are doing so again this year. In addition to providing farm skills, the apprenticeships offer business planning and advanced technical skills training. They also offer apprentices in-depth tours of other sustainable farms in the state to see how different farmers manage their operations.

Before receiving the Beginning Farmer Grant, SCLT was making inroads in most of the areas funded. But the grant has greatly expanded our capacity, as well as the number of beginning and working farmers, agricultural partners and property owners we can impact. It has also strengthened farmers and farm networks in the state and accelerated our common goal of helping Rhode Islanders meet a greater share of our food needs in the very near future.

Your ticket for the: Supporting the farmers who feed us

Supporting the farmers who feed us