‘City Farm becomes part of you’ 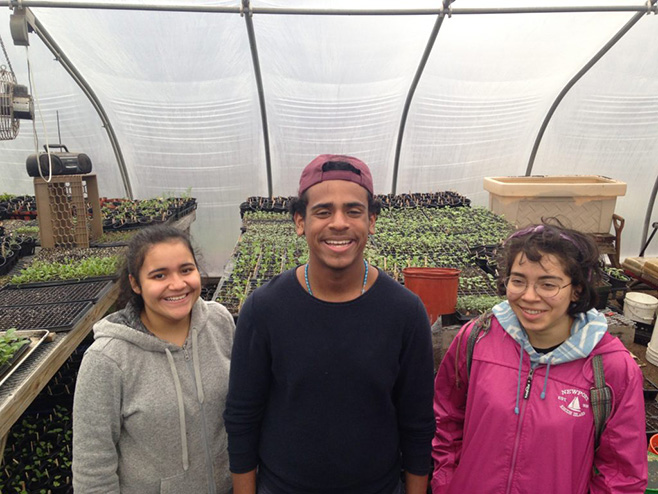 As the growing season ramps up, SCLT’s greenhouse at City Farm becomes a bustling place. Even with winter’s final storm (in April!) only just melting away, tiny sprouts are making their way through the soil on a recent Friday afternoon. Their progress is closely monitored by the skilled staff, high school interns and a revolving cast of devoted volunteers who drop in throughout the week to help out.

With the annual Rare & Unusual Plant Sale now only weeks away, it’s all hands on deck.

Under the direction of City Farm Steward Rich Pederson, Craig Demi and Nayeema Eusef serve the vital roles of farm apprentice and assistant farm steward, respectively. As Nayeema transplants delicate pepper seedlings into individual pots, she explains where the greenhouse staff and volunteers are in the process of preparing for the May 14-15 Plant Sale:

“We’ve already had to move the cold-hardy plants outside, like chards, broccoli, and kale, because there’s no way to make room for the [estimated] 20,000 plants that get their start in the greenhouse. The peppers and tomatoes don’t like the cold, so they get to stay inside until the very end,” she says. 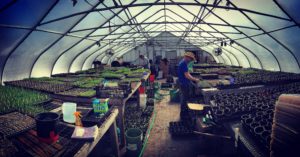 One of Nayeema’s favorite parts of the season, though, is yet to come. “I’ll be picking up the chickens in a week or so, and that’s always a fun time. The kids who come to the Farm love them, and they’re just a lot of fun to have around,” she says. The chickens also provide the eggs sold at the Hope Street Farmers Market in Providence from May to November.

Meanwhile, after Craig and two of the Met School interns, Alex and Alejandra, return from the communal lunch at SCLT’s office, he immediately sets to work watering the hundreds of sprouting plants. While his apprenticeship started in March, Craig has been involved with SCLT in various ways for years. He was originally a patron of City Farm’s stand at the farmers market, eventually became a member, then a volunteer last year, harvesting produce once a week. Finally he grabbed the opportunity to join the seasonal staff when an apprenticeship opened up.

“I can remember when I was working at a bakery many years ago, and Rich used to bring in the raspberries they’d grown at City Farm. I would use them that very morning, and it was great because they were just … that fresh,” he recalls. Making a connection with the farmer was special. “There was something so cool about him coming in, and there being a face for the produce like that.”

On this day the staff, interns and volunteers are hard at work inside the warm greenhouse prepping for the tomato seeding. By now, two more Met students, Jariliz and Noelle, have joined the crew. Tomatoes are one of the most important plants sold at the Plant Sale, and this year the farm will be offering 55 unique varieties. With the hardier plants outside, there’s plenty of room for the tomatoes, and seeding the trays is the big task of the day. Luckily, Fridays are a popular day at the greenhouse, so there are plenty of green thumbs about.

Over in the heart of the operation, the compost corner, Alex and Alejandra fill four-inch pots for transplanting. Despite completely different academic focuses (Alejandra studies Arts and Environmental Activism, while Alex pursues Biotechnology and Genetic Studies), they both feel a special connection to the farm and the camaraderie of those bringing the plants to life.

“There’s something deep and amazing about being a part of this place,” Alejandra says, with Alex nodding next to her. He follows up with, “City Farm becomes a part of you.”

Alex, a newcomer to the farm, says, “I feel at my best when I’m working with the earth, and it feels really special to be doing that here.”

As long-time volunteer Kris Kearney sets to work on the tomatoes, Rich and Craig exuberantly discuss the cucumber seeds they each saved from last season.

“How well will they germinate?” Kris wonders.

“We’ll see!” says Rich. Germination can be serendipitous, making it impossible to predict exactly what will be available at the Sale until mid-way through the weeks of transplanting that take place every April and May.

Later, Kris talks about how her background led her to Southside. “I have a big garden and a degree in horticulture. Everyone gets bored of hearing me talk about plants, but I get to come here and everyone loves talking about them!”

While people continue with their individual tasks, Rich gives Nayeema and Craig pointers for the Urban Agriculture Kickoff workshops around Providence the next day. As they chat, they continue to coax along the thousands of seedlings preparing for their big day in the sun.

Bruce is a senior at Brown University who is serving as a spring intern at SCLT.

SCLT is fortunate to have a robust apprenticeship program this year, with three USDA-funded positions at sustainable farms we partner with, in addition to Craig’s apprenticeship at City Farm. (The other apprentices are working at Scratch and Blue Skys Farm, and Pat’s Pastured.) In our fall newsletter we’ll hear about their experiences, and whether they plan to pursue small-scale, organic farming in Rhode Island after their apprenticeships end.

Your ticket for the: ‘City Farm becomes part of you’

‘City Farm becomes part of you’