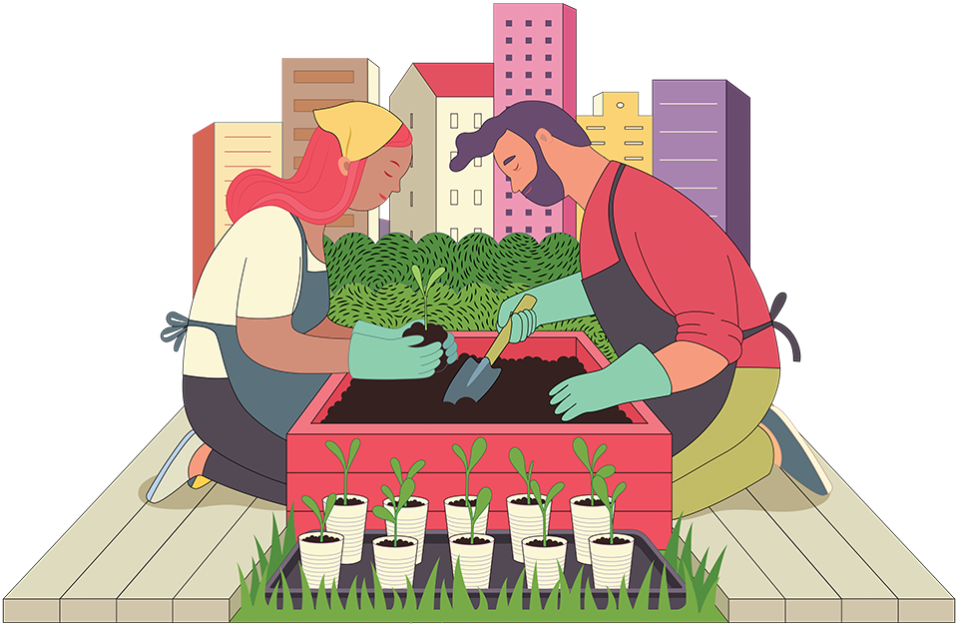 The Yangs work back-to-back. Phillip sits on an overturned milk crate separating an unruly mob of tomato seedlings from the germination tray. Vue’s busy hands ruffle the cilantro in large plastic pots, seeking the yellowed and the limp. She points to the stems at the base of the plant.

Monday through Friday, nine to five, Phillip is a draftsman for an architectural firm in Fall River; Vue assembles jewelry findings at a South Attleboro factory. Nights and weekends, they are farmers. On this March Saturday, the air is warm and white with wisps of ground fog chased by the off-and-on rain. Veteran growers like the Yangs know better than to let their heads be turned by the first stretch of temperate days. Winter may be dying, but it’s still capable of a twitch or two that delivers a plant-slaying blast of icy air. Safer to tend the future in the heated greenhouse, where pots of stiff lemongrass mingle with buckets of chayote fruit.

This will be the Yangs’ second season farming at the Southside Community Land Trust’s Good Earth Farm in western Cranston. But it’s their third decade planting plots managed by this Providence institution. In 2021, the Yangs decided to try growing for market instead of their own consumption, leasing a third of an acre and a high tunnel — an unheated, plastic-covered hoop-house — where cabbages have broken ground. Phillip looks on approvingly.

Cultivation is an act of persistence, driven by the stick of hard work and the carrot of a good harvest. While the Yangs beavered away on spring’s doorstep, the SCLT prepared to reap the benefits of forty-one years of cultivating forgotten, trash-strewn city lots, private and public partnerships, and above all, community. That same afternoon, workers were spraying foam insulation inside the SCLT’s new 12,000-square-foot headquarters at 404 Broad St. in Providence. The two-story, 1850s structure will feature a suite of offices and a Youth Enterprise center, a USDA-compliant produce preparation and storage facility, a distribution center and a commercial kitchen. Three healthy-food tenants will occupy spaces on the ground floor.

SCLT had long outgrown the Victorian on nearby Somerset Street that served as its operations center since its founding in 1981 by neighborhood residents, Hmong refugees, recent Brown graduate Debbie Schimberg and two friends — a “hippy-dippy” city farm in a “bombed-out neighborhood,” says SCLT board President Rochelle Lee.

“There was a lot of help in those days. You could simply call the councilperson, fill out a form and you could cultivate. But it wasn’t at scale, and it wasn’t organized around commerce or social justice,” she says. “We wanted to celebrate one another, and food is a good way to connect and to validate people.”

The SCLT has always “pushed the boundaries of local food systems,” says Executive Director Margaret DeVos. But about a decade ago, it began to develop a plan to capitalize on a burgeoning interest in urban agriculture. The city of Providence already had a pro-farming regulatory structure: Entities aren’t required to pull permits to install community gardens.

“The USDA and other entities showed that they really wanted to expand their development of the local food system, recognizing that agriculture wasn’t reaching a lot of plates. They were looking for alternative ways to grow the foods needed and marketed in the neighborhoods where people need them. That’s taken more than ten years, but it takes a while for people to catch up.”

In October 2018, Southside launched its GROW! capital campaign to raise $5.4 million to build the Farm-to-Market Center and maintain its land holdings. The campaign sought public and private donations even as the pandemic rendered its annual fundraising event virtual. By 2021, SCLT had raised about 85 percent of the total, but it wasn’t enough to realize the organization’s vision to add space for three local businesses and the extra expense that came with it. In October 2021, the SCLT secured a $2.1 million loan from the Healthy Retail and Commerce Fund, a collaboration between the Conservation Law Foundation and the Massachusetts Housing Investment Corporation, which administers the fund. The dollars came from Blue Cross and Blue Shield of Rhode Island, the Kresge Foundation and Neighborhood Health Plan of Rhode Island.

Darrèll Brown, vice president and director of CLF Rhode Island, says that SCLT’s 404 Broad project was a good investment and a “perfect fit” for his organization.

“It will allow city residents to participate in farming, and it’s an attraction for the youth to learn about the business of farming. Having that activity occur in an urban setting is healthy for the environment.”

According to the National Conference of State Legislatures, many states and cities have opened offices of sustainability and founded food policy councils to amplify local food production and strengthen networks among producers, distributors and consumers. Emily Koo, the city of Providence’s director of sustainability, says that SCLT’s expansion dovetails nicely with the city’s climate justice goal to “build a local and regenerative economy which includes support of a resilient local food system.”

On the federal level, a 2018 federal farm bill directed the USDA to collect data on urban and suburban agronomy in all its forms and established the Office of Urban Agriculture and Innovative Production, along with an advisory council to help develop policy and identify the challenges. The bill threw in a little seed money — $25 million over five years — to support research and extension activities to enhance urban, indoor and other emerging agricultural production. This represents a new path for the agency that has long been organized around the needs of larger, rural farmers, and continues the work of Secretary of Agriculture Tom Vilsack, who returned to the position in 2021 after eight years in the Obama administration.

“It’s about food security,” says Karen Woodrich, acting regional conservationist for the Northeast Region for the Natural Resources Conservation Service, which provides technical and financial assistance to growers and leads this effort within the agency. “We know that not everyone has access to fresh produce and meat. The USDA has realized that this availability should not be determined by your ZIP code, and the urban setting plays such an important role.”

For the last decade, the state’s NRCS office has explored creative ways of funding small farms and community gardens in nontraditional settings, including those operated by the SCLT, says Walter Marshall, assistant state conservationist for management and strategy. In 2018, the NRCS, working with the State Conservation Committee, turned to “agreements” rather than the traditional contracts written for large, rural farms to provide dollars for soil barriers, seeds, fertilizer and lumber to build raised beds.

“With agreements, the rules are not so rigid, and we can target the smaller producers,” he says.

The benefits are many and the expectations are high. Growing food in the city, by and for city residents, represents the ne plus ultra of intersectionality: physical and mental well-being, economic development, environmental restoration, racial equity. But land availability and ownership present substantial challenges.

“It’s extremely difficult for an urban farm to be commercially viable,” says Darriel Harris of Johns Hopkins University’s Center for a Livable Future. “On three-quarters to one-and-a-half acres, you have to be extraordinarily efficient to be viable. A high level of expertise is required, and the people who have that level of expertise usually want larger tracts of land.”

The SCLT’s Farm-to-Market Center aims to increase the viability of urban farms.

“All the farmers I work with are immigrants with pretty diverse backgrounds and ages, but because they don’t come from a conventional farming background, they don’t have the capital to buy a greenhouse, install pumps or buy the land,” says SCLT’s Jake Stanton. “We’re taking care of the capital and giving them the space to create a farm. A lot won’t have the volume or connections to sell wholesale, so we aggregate them together and open up these markets that wouldn’t be available to them.”

In March, it seemed hardly likely that the building would be ready for its June ribbon-cutting. The exterior, a deep charcoal gray, was nearly finished, but the interior was a warren of framed, blank walls extruding electrical conduits. Jazandra Barros, community partnerships manager, leads a tour around bales of insulation and piles of construction detritus, explaining how each space will knit SCLT’s mission to the practicalities of growing and distributing food.

“We’re trying to build the community,” Barros says. “How do we weave these threads together?”

The Yangs believe that tomatoes are an excellent place to start. Their informal survey of farm stand customers last year indicated they would be a bestseller. And by the time the Yangs are picking the first fruits, SCLT’s Farm-to-Market Center at 404 Broad St. will be up and running, strengthening that connection between urban farmers and consumers.

“It’s very hard work, but in September, you get your reward. And if we grow enough, we’ll have a little bit of a profit,” Phillip says. “You have a big dream. Hopefully you get there.”

Your ticket for the: Southside Community Land Trust remains at the forefront of urban farming in Rhode Island