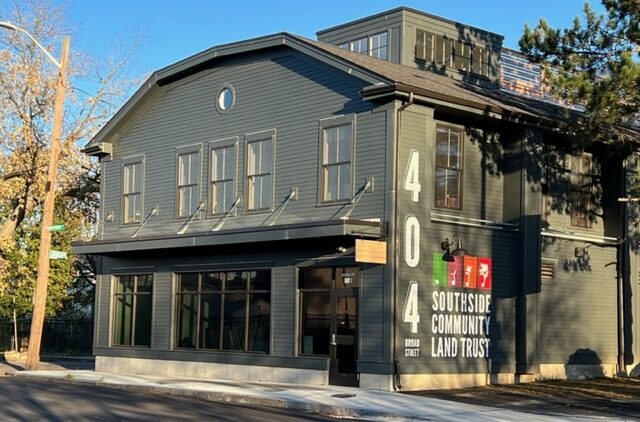 Unless you’ve lived in Providence for a long, long time, you probably wouldn’t know that our newly renovated building at 404 Broad Street started out as a livery, where neighbors stored their horses and carriages.

Advertisement in the 1870 Providence Business Directory for the Trinity Square Stable, which opened for business in 1870.

The Trinity Square Stable was built in 1868 to serve wealthy residents of the South Side and West End. When automobiles replaced horse-drawn buggies, the building became a neighborhood garage until homeowners were able to add driveways and garages to their own properties. 404 Broad Street has housed many businesses during the last 150 years, including a Bank of America branch and, more recently, a halal grocery store.

On Oct. 28, the Providence Preservation Society recognized the renovation of 404 Broad Street as among the “initiatives that represent excellence in historic preservation, design and planning, highlighting those that enhance Providence’s vibrancy while also maintaining its unique historic character.” 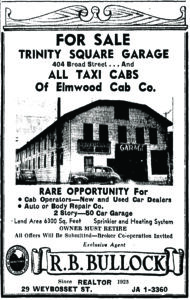 The collaboration between SCLT and the architecture firm Union Studio received PPS’s Mission-Driven Preservation Award for reimagining the building as a hub of farm-to-market activity, including space for our education and other programs, offices, produce aggregation and cold storage and three retail businesses on the ground floor.

“We’re honored to have worked alongside SCLT to get this building ready for its next 100 years of service,” said Ben Willis, an associate at Union Studio. “It’s a physical reflection of SCLT’s commitment to the neighborhood, and their talent at breathing new life into often overlooked spaces.”

Other winners of PPS’s 2022 Preservation Awards include the Providence Athenaeum, the Public Library and the Beatrice Hotel. You can see the full list here.

According to Executive Director Brent Runyon, the PPS sees beyond the importance of historic buildings and architecture to value “people, neighborhoods and the ways that these buildings serve them.” He added, “This year’s Preservation Award winners represent the best examples of that principle in action, preserving our architectural history while breathing new life into our communities.”

You can learn more about the building’s history in this excellent report prepared by long-time supporter Becky Silliman.

Your ticket for the: New headquarters wins historic preservation award