Sankofa World Market is on track to succeed 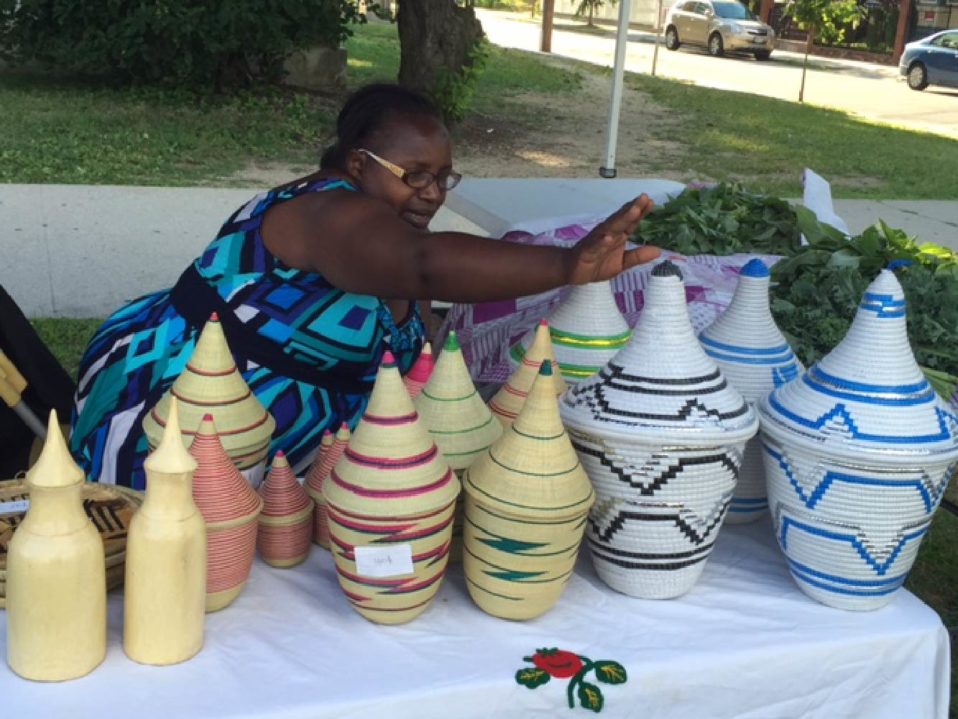 This past growing season four Southside market growers were out in pouring rain and blistering heat every Wednesday afternoon, selling their produce at the Sankofa World Market, the city’s newest farmers market. With help from our staff, they ran a successful collaborative booth featuring both familiar and exotic produce native to the growers’ home countries.

The Market was started by the West Elmwood Housing Development Corporation in 2014. It was moved this summer from Dexter Street to a much more visible location: the front lawn of Knight Memorial Library, on Elmwood Avenue in the West End. The move definitely paid off, with sales up over last year and on-track for a market in its second year, according to Farm Fresh RI.

Longtime Southside market grower and garden leader Chia Xiong believes the location and the market have great potential. Chia would know, having seen it happen before. In 2009 she helped start the now-successful collaborative booth at the Broad Street Farmers Market.

Southside staff are also no strangers to the slow and steady work of building a market. “Markets take time to develop,” says Community Growers Director Rob Booz. “Just like we watched Lippitt Park, Armory and Broad Street grow into successful markets, it’s been great to see Sankofa develop into a thriving market, and one that serves the neighborhood so well.”

Staff played a variety of support roles, both in the months leading up to the market as well as during the growing season, including marketing produce, setting up the display, staffing the booth and keeping sales records.

The Southside collaborative at Sankofa was a mix of new and experienced market growers from three continents, including Chia from Laos, Garmai Mawolo and Hawa Kanneh from Liberia, and Jaime Salinas from Venezuela. Most had to leave their home countries due to economic or political upheaval. Growing and selling food was a way to do what they loved and to connect with their new neighbors, from their homelands and elsewhere.

The booth offered a range of produce, including hard-to-find crops (in the U.S., at least) like bitter ball (a relative of eggplant), fiwate (a fragrant Liberian herb somewhere between thyme and oregano), callaloo (a kind of amaranth) and sweet potato greens (healthy and delicious). The fact that they were selling these crops in the West End (home to many of Providence’s recent immigrants), at a convenient location, no less, earned the booth a devoted group of customers who came back week after week.

The market ended in September, but everyone’s already thinking about next year. Southside staff are working with market growers to come up with improvements, while the growers are looking for more land to farm so they can expand and sell at other markets. But, they’re all quick to add that they’re coming back to Sankofa next year.

Come check it out when the markets re-open next June!

Your ticket for the: Sankofa World Market is on track to succeed

Sankofa World Market is on track to succeed