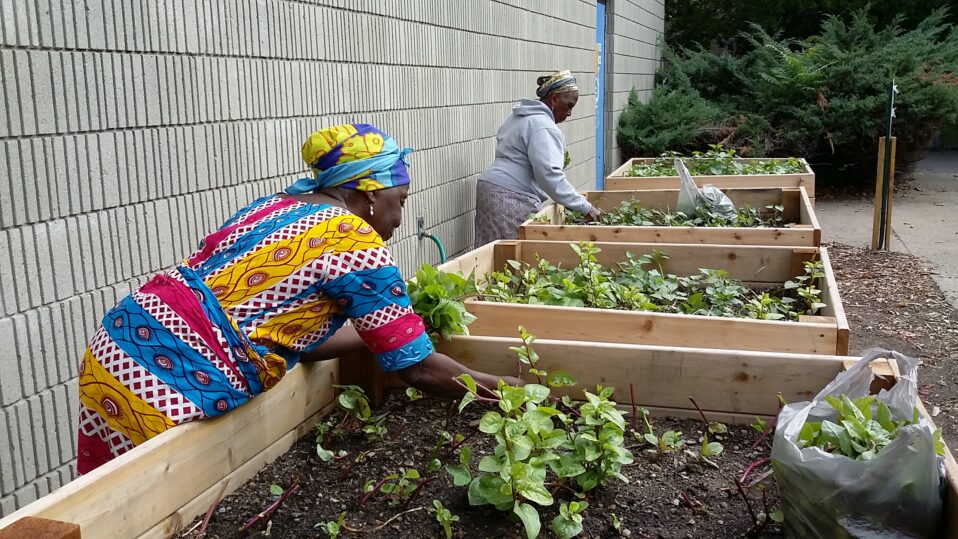 Usually it takes somewhere between several months to a year or more for a new garden or urban farm to go from the idea stage to completion (with design and planning, funding, installation and planting in between). So, when a garden for the nonprofit Higher Ground International was built within two months of being proposed, some of its clients called it a miracle.

One thing for certain is that it’s difficult to say no to Higher Ground’s charismatic founder, Henrietta White-Holder, a powerful force of good in the world. Her organization works to empower members of the West African diaspora in Providence as well as those seeking peace and prosperity in Henrietta’s native Liberia. One of her projects is raising funds for an indoor marketplace to help farmers, especially women, sell their produce in rural Liberia.

In July, an SCLT staff member was introduced to Henrie at a community gathering. Coincidentally, another staffer met her at a different event the following morning. By then Henrie had already formulated her proposal: that SCLT help answer the need among Liberian elders to grow traditional West African produce by building four raised beds at the organization’s Rukyia Center on Prairie Avenue.

Within weeks we provided the technical expertise, wood, soil and other materials for the beds, which clients of Amos House assembled. The city of Providence also contributed to the effort. You can see a video of one of the grateful elders singing in her native Liberian dialect while working in her garden bed on the nonprofit’s Facebook page

To learn more about Higher Ground, go to their website: www.highergroundintl.org