Farms across RI got hands-on help from AmeriCorps crew 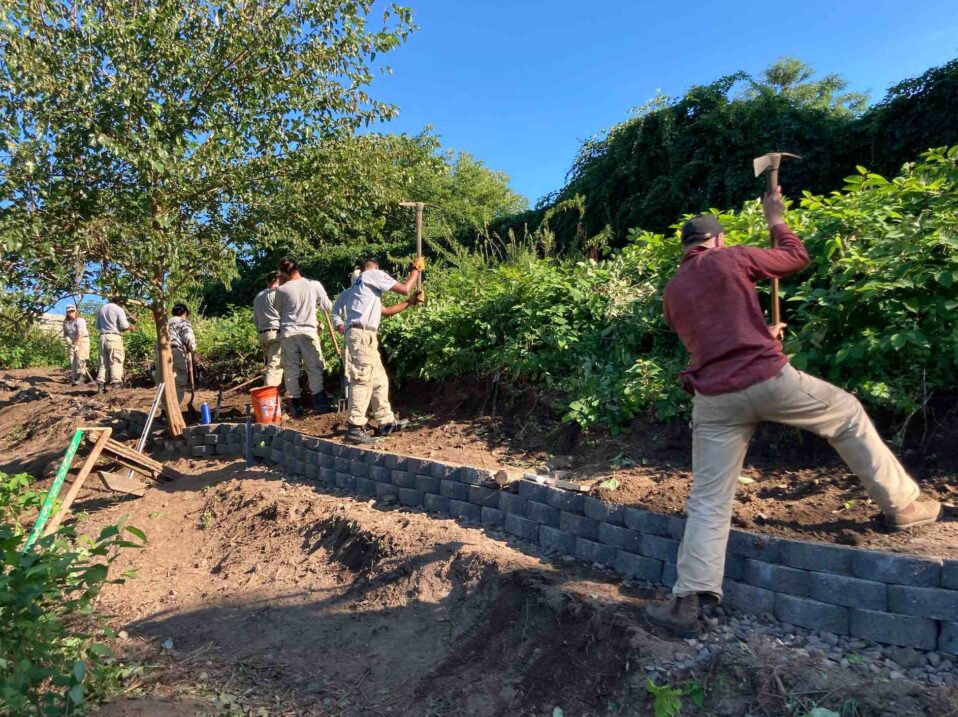 If you’re a homeowner, you know there’s always something needing to be repaired, rebuilt or replaced. If you run a land trust with 25 properties spread over 77 acres, that to-do list can seem endless.

To tackle these tasks, SCLT has been fortunate to have help from crews of young people serving in the AmeriCorps NCCC (National Civilian Community Corps) for the past three years. From mid-August until early October, a crew of nine young people set up camp at the Good Earth Farm in Hope, RI. From there, they travelled from one end of the state to the other, working on SCLT farms and gardens as well as at partner properties, including Osamequin Farm in Seekonk and the Narragansett Tribal Farm in Charlestown. 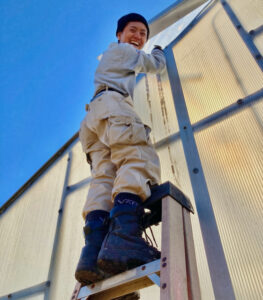 NCCC crew member helps put a new “skin” on a greenhouse at Urban Edge Farm in Cranston in August.

The crew cleared brush, weeded and mulched, “re-skinned” a greenhouse, built a retaining wall and 90 foot path and even painted the interior of our office building. They removed 2,000 lbs. of vegetation from the Tribal Farm and harvested late-summer vegetables at Somerset Hayward Farm. At Osamequin, they cleared brush around campsites, and weeded and mulched around blueberry bushes.

But, their work at Galego Community Farm in Pawtucket may have the most enduring impact. A large amount of growing space at the property is above a steep slope that was accessible only by a long roundabout path or an uphill climb, neither of which was practical.

“Moving anything heavy up and down – compost, mulch, vegetables, wood for raised beds, etc. – was so difficult that gardeners would often use fewer resources than needed and have less garden success as a result,” said SCLT’s Community Growers Coordinator Andrew Cook, who managed the project. 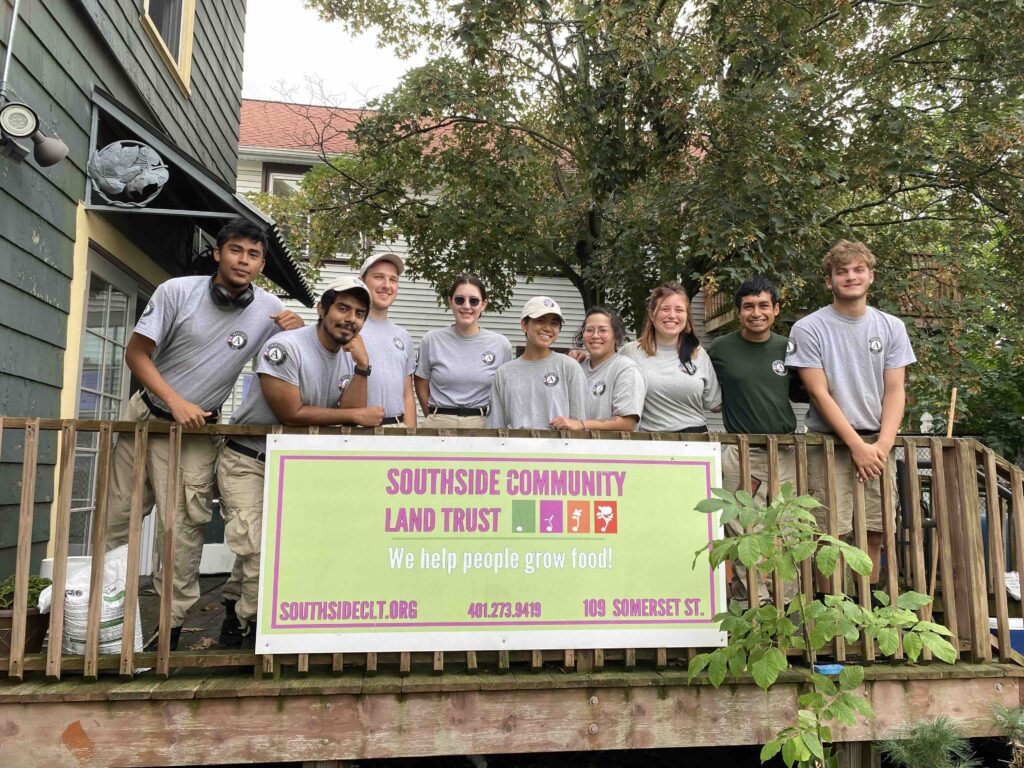 Looking good at the start of a painting shift at our Somerset Street office.

The NCCC crew spent four days working with Andrew and other staff who had already gotten started when they arrived, using a rough plan drawn up by landscape architect Austin Bamford. They carved a path across the slope and built stone and brick retaining walls on the uphill and downhill sides, using fieldstone and bricks they mostly gathered from Galego and other SCLT sites.

“The new path will make it much easier for gardeners to work on their plots and get better yields,” said Andrew. “The retaining walls also open up possibilities to plant erosion controlling herbs and fruit on the sloped area, which would otherwise be hard to use. The NCCC crew was good natured and not afraid of heavy work, and they learned some very basic masonry and grading in the process.”

The crew comprised young people from around the country, including at least two who came from farming communities. Ethan Espinoza, the field team leader, grew up in rural Idaho. Kelly Irish was raised on an alpaca farm. But for others, working on farms has been eye opening. Lucy Cappello, from New York City, had never worked the land before and was grateful for the experience.

With no shortage of maintenance and farm projects in the future, SCLT staff are sure we can keep future NCCC crews just as busy as we did this year.

Your ticket for the: Farms across RI got hands-on help from AmeriCorps crew

Farms across RI got hands-on help from AmeriCorps crew