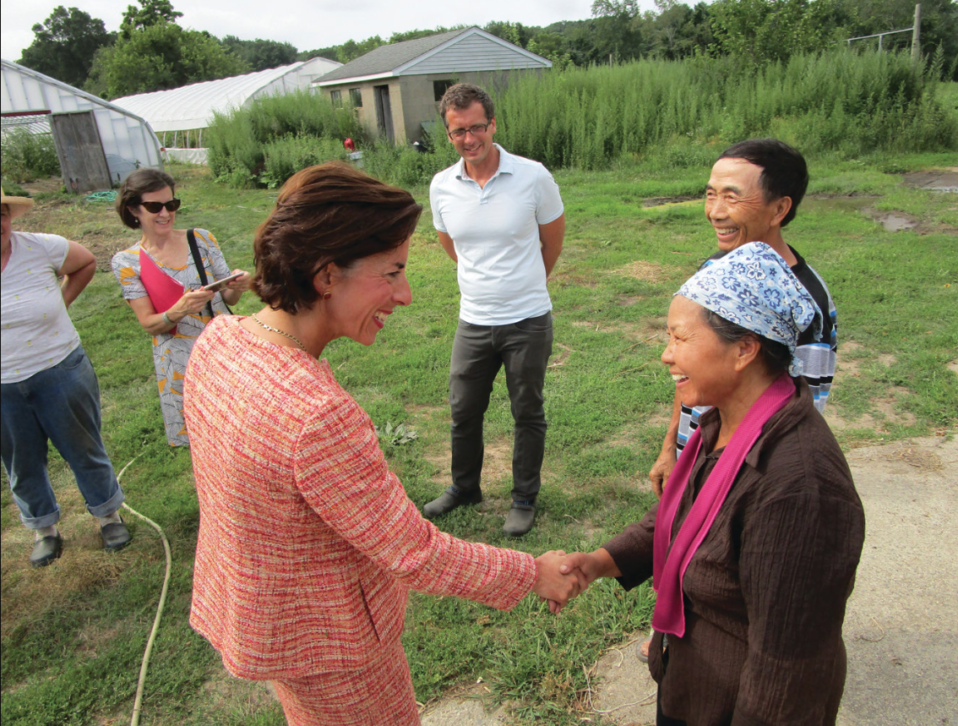 In the past, Christina Dedora has held jobs in the corporate world and public sector. Now, she can be found working in fields and greenhouses in Western Cranston – and she wouldn’t have it any other way.

“It’s a labor of love … Being outside and being your own boss, it’s just amazing,” she said.

Dedora is the owner of Blue Skys Farm, one of several growers located at the Urban Edge Farm at 35 Pippin Orchard Road. She has rented space there for 13 years.

The 50-acre site of Urban Edge Farm was purchased by the state in 2002 for $500,000, with some funding provided by the city and the Champlin Foundation. It is managed by the Southside Community Land Trust through a lease with the Rhode Island Department of Environmental Management.

On Tuesday morning, Gov. Gina Raimondo, DEM Director Janet Coit and others visited the site to tour its various operations and learn more about its role in local agriculture.

Dedora spoke of the transformation she has seen at Urban Edge over the years, including the construction of roadways and the installation of irrigation. Greenhouses have also been erected thanks to support from the Natural Resources Conservation Service.

“I’ve seen so much [new] infrastructure, it’s amazing,” she said.

Blue Skys Farm is chemical-free and grows herbs, flowers and vegetables. Its products are sold at local farmers markets – including, thanks to its greenhouse, at winter markets – and through Farm Fresh RI.

“My mission, before I retire, is to get more people to go to farmers markets,” she said.

Dedora said the infrastructure provided at Urban Edge Farm is invaluable to those looking to get a start in the agriculture industry, given the costs involved in acquiring land and starting from scratch in terms of equipment.

She and Coit both noted that some people who started at Urban Edge have expanded and found new homes elsewhere.

“It’s a good way for people who don’t have the resources to start their own farm,” Dedora said. “Everything that you need to run a business is here, thanks to DEM, thanks to the Southside Community Land Trust.” 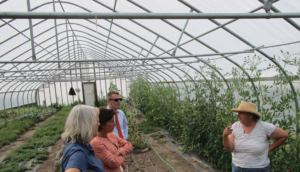 RI DEM Director Janet Coit and Gov. Raimondo inside one of Christina Dedora’s greenhouses, where she grows food, flowers and herbs for sale across the state.

Craig Demi, director of operations for Southside Community Land Trust, said 13 farmers operate at Urban Edge, including three newcomers who began this year. He noted that work has been done to expand growing areas through an enhanced irrigation system.

In addition to her own farm, Dedora helped form Sanctuary Herbs of Providence in 2016. It grows aromatic and healing herbs, partnering with immigrant and refuge farmers to produce tea blends and cooking herbs.

Among the farmers for Sanctuary Herbs are Choua and Kia Xiong, whose Greenleaf Farm is also based at Urban Edge. The Providence residents emigrated to the United States in 1979 and have nine children.

Choua Xiong said they have been farming since 2000. In addition to herbs, they grow tomatoes and various produce native to Africa – “Too many things to list,” he said with a laugh. Like Dedora, they sell at farmers markets.

Dedora noted the collaborative relationship of the farmers at Urban Edge, which extends from the growing process to sales.

“If they have extra produce that I don’t have at the farmers market, I’ll sell it for them,” she said.

Coit said access to farmland in the state has been identified as a key need in terms of the state’s food future, and that makes places like Urban Edge Farm especially important.

“We feel like it’s been a huge success,” she said.