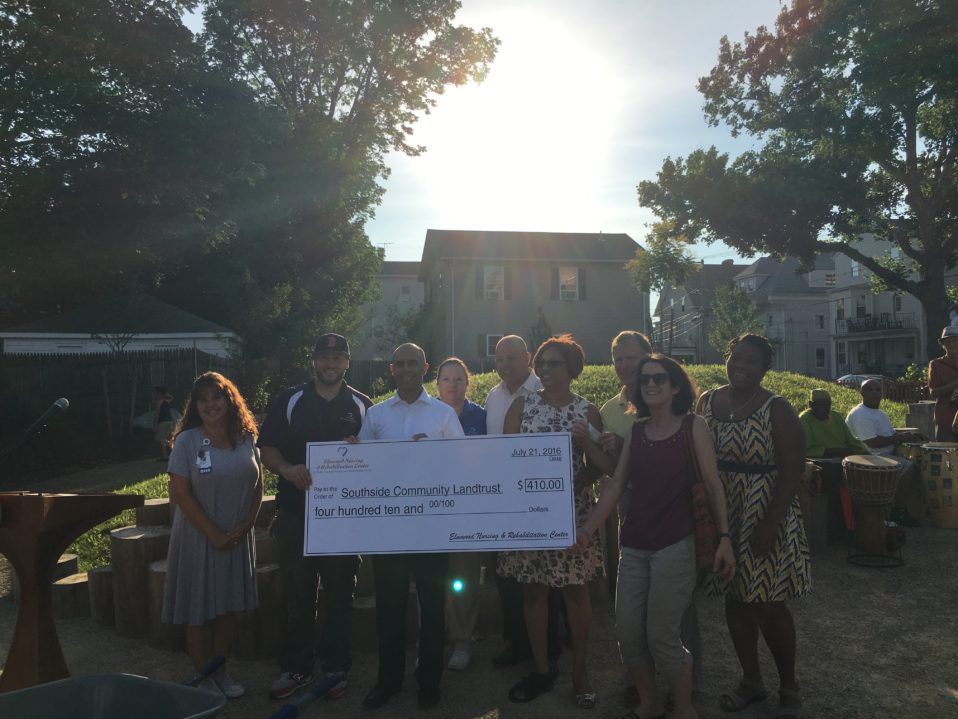 The community garden was built more than 30 years ago across the parking lot from St. Joseph Health Center on Broad Street. In the last two years the garden has become a thriving shared space for neighbors, market growers and five social service agencies that grow food for and with clients, including the Rehabilitation Center, and Dorcas International Institute of RI, which uses the site as a living lab for its ESL classes. 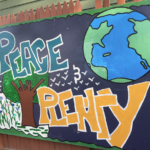 The July event marked the final phase of the park’s evolution from a collection of vacant, trash-strewn lots. It now features a playground, trees and shrubs and benches made of natural materials. Funding came from the RI Department of Environmental Management, Community Development Block Grant funds from the Providence City Council, and a partnership between the Parks Department and Friends of Peace and Plenty Park. Along with Doug and Karen, others in attendance included Mayor Jorge Elorza, Parks Superintendent Wendy Nilsson, Rep. Grace Diaz, Sen. Juan Pichardo, Councilwoman Mary Kay Harris and representatives from RI DEM.

Noting how the park and community garden have improved the safety and quality of life for the northern Elmwood community, and thanking those who helped with the park improvements, Mayor Elorza said: “It’s the things we own in common that are the most important to us.”

So, what will the $410 be spent on? Doug named several possibilities, including “a tool shed, pollinator plants to enhance the garden’s borders and structures to attract beneficial wildlife, like bat boxes and mason bee boxes.”

The Peace and Plenty Garden welcomes donations from anyone who wants to help with improvements or maintenance of the property. If you’d like to contribute, please email Doug at doug.crimewatch@gmail.com

Your ticket for the: Peace and Plenty Garden thrives in Elmwood