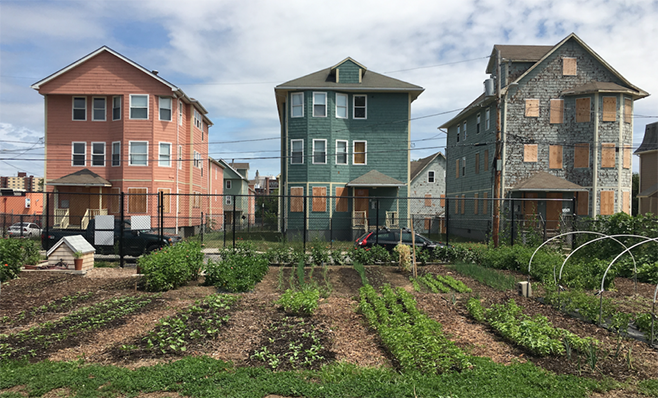 Five high school students knelt over a bucket of garlic seed behind the Salvation Army on Broad Street in Providence. They gathered on a corner lot bordered by littered sidewalks and abandoned houses, getting ready to plant cloves whose bright green shoots will emerge early next spring. 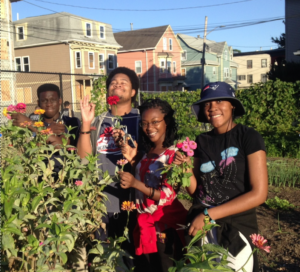 “I remember when this was just an empty lot filled with couches and mattresses,” said Sergio Perez of the land where they stood. Planting garlic brought Sergio and Jariliz Taveras, a fellow SCLT youth staff member, full circle: both had planted the garlic beds last fall that yielded the micro-farm’s very first crop. They and their co-workers have played a major role in transforming the former vacant lot into the productive oasis it is today, where much-needed healthy produce is grown for, and consumed by, its economically challenged neighbors.

“Somerset Hayward Farm is a big, positive addition to the neighborhood,” said André Freeman, another youth staffer from lower South Providence, about the farm’s impact.

Acquired in 2015, this quarter-acre parcel a few blocks from SCLT’s office is now home to the Somerset Hayward Youth Enterprise Farm (SHYEF), which just finished its first full growing season. The SHYEF takes up approximately two-thirds of the property, and provides training and part-time jobs for roughly a dozen local high school students each year. The other third is tended by Hawa Kanneh, a Liberian refugee and experienced farmer from the neighborhood.

Hawa raises ethnic crops such as okra, sweet potato greens and Fiwate (an African herb similar to basil), frequently accompanied by her three grandchildren who play at the farm while she tends her plot. Hawa sells most of her harvest at the Sankofa World Market on Elmwood Avenue.

SHYEF evolved from a planning charrette held at the Salvation Army in 2015. SCLT youth and full-time staff, neighbors and area stakeholders shared ideas about how the space could be used to improve residents’ health and safety, and bring some natural beauty to the built environment. The next year youth staff cleared the site of debris, spread clean soil over it, seeded cover crop and mapped the plots. This past year they weeded, watered and harvested their first crops, including snap peas, string beans, radishes, beets, cilantro, scallions, Aji peppers, and basil, in addition to the garlic.

They also grew bushy zinnia plants with multi-colored blooms. The flowers brought smiles to passersby who were pleased to see all the activity, and investment, in a site that had long been a neighborhood eyesore.

In addition to working the land, youth staff attend workshops about environmental justice, climate change and food insecurity, and meet with leaders in the local food sector to learn about food policy and career possibilities. They also conduct door-to-door outreach in Providence and Pawtucket about area farmers markets. 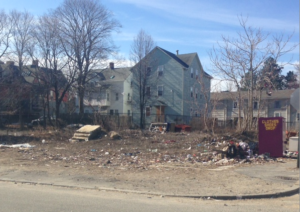 The lot before the Somerset Hayward Youth Enterprise Farm was built.

From their outreach in South Providence last summer, youth staff learned that many residents weren’t able to shop at farmers markets because of time constraints or lack of mobility. To remedy this, they imagined a food delivery project that would make it easier for people to get healthy food. With the help of Paul Murton, owner of the Wickenden Street cafe The Shop, they learned about entrepreneurship, wrote a mission statement and developed a plan. They took orders from 12 residents for food grown at SHYEF and brought it to a convenient location where residents could pick it up. Some youth staff later said the project was the most personally rewarding of the summer.

Other meaningful work and positive changes are radiating from this 10,000 sq. ft. parcel. In addition to the delivery service, youth staff were invited to sell their produce at two pop-up farmers markets at the Renaissance Church at 184 Broad Street. Amos House is also using the farm as a job skills training site for men and women in their A Hands Up Program, which pays indigent adults $50 per day. To date, five Amos House work crews have dug beds, weeded, harvested and spread woodchips at SHYEF.

Next year, SCLT will continue to develop young people’s farming and environmental stewardship skills at the new farm, while supplying neighbors with healthy food. Already, SHYEF is fulfilling one of its goals: to inspire a new generation of food activists and neighborhood leaders.

Your ticket for the: A farm is born, and a neighborhood begins to heal